How the Government Can Help Boost College Savings

This week has been eventful, no matter what part of the vote you found yourself in during this past election. However, regardless of which candidate made it to the Oval Office, or what their agenda looks like, the fact that Americans currently find themselves in a $1.3 trillion debt due to student loans is not an ‘alternative fact.’ So, how can the folks in Washington help American citizens with the looming debt destined to be with them during their formative years after college?

A recently proposed bill called the 529 and ABLE Account Improvement Act is looking to give Americans the ability to use funds saved in 529 college savings plans, named after the IRS code that created them, to pay back student loans or be donated to charity without tax consequences, under the proposed bill.

529 college accounts were created in 1996 for the purpose of providing families with a tool to enable them to save in advance for the increasing costs of higher education. Currently, about $266 billion is invested in 529 college accounts, according to the College Savings Plans Network.

The proposed bill would also encourage companies to help employees open 529 accounts and contribute to the plans by offering businesses tax incentives, and by also removing limits on the number of times per year investments in the accounts can be changed, which currently stands at twice a year. Currently, funds saved to a 529 account are not qualified to be used for loan repayment, since student loans are not categorized as an educational expense. Meaning that by withdrawing from your 529 account to repay your balance, you may be subject to penalties and income tax. The bill seeks an expansion of the tax credit small employers receive for setting up retirement plans to also be applied to college savings plans.

Another Senate proposal under the Boost Savings for College Act (Boost) includes a nonrefundable tax credit that acts as a savings match for low and moderate-income families who contribute to 529 plans. The bill also provides an employer match, allows excess savings in a 529 account to be rolled into a Roth IRA for retirement, and enables families with a disabled child to roll over a 529 account into an ABLE account. The 529 account must be open at least ten years before it can be rolled into a Roth IRA, and the Roth IRA can belong to the owner or the beneficiary of the 529 account.

The enacted legislation also enables computers always to be considered as qualified 529 plan expenses, allows school refunds to be re-deposited into 529 accounts without penalty if a student withdraws from school, and eliminates the encumbrance for people with multiple 529 accounts to aggregate them when calculating the earnings on distributions.

While there is much work still to be completed to balance the increasing cost of higher education to grow on par with the average household income, the aforementioned proposed bills open the door for Americans to prepare for the cost of college. These terms would provide Americans with solutions to have access to previously saved funds without penalty should their children seek out alternative forms of education not qualified for a 529 plan.

Dear Washington, it is now up to you to help your citizens continue their education while having choices to fund their knowledge. 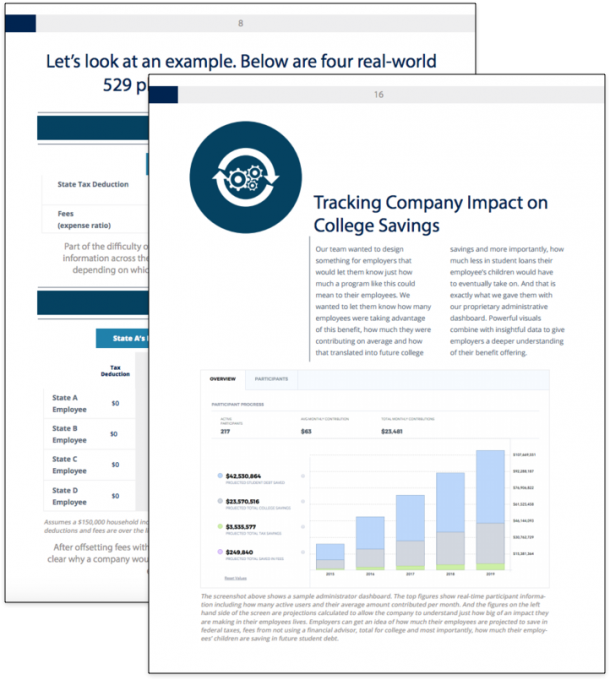 Get our FREE White Paper on Employer-Sponsored 529 plans

Sign up for our newsletter to get our Free White Paper on Employer-Sponsored 529 plans and receive the latest updates from our team.

You have Successfully Subscribed!